It’s hard to believe it’s been 3 years since I last visited Heritage village with my family. Being a tradition that had been stopped due to scheduling conflicts with university, it was nice to relive the experience once more. Being from the Eastern Passage, my Aunt and Grandmother never truly get the chance to marvel at the sights the Eastern Shore offers. 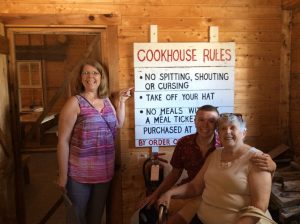 Arriving at Heritage Village immediately transported us back to the 1940’s. Walking through the main building, my Nanny began having memories flooding back from her youth. After working up an appetite from the car ride, without haste, we made our way to the Cookhouse. We got our food, and our homemade iced tea and lemonade. My Nanny told us a story of preparing a dinner with Grandpa, and dropping the roast causing it to slide across the kitchen floor. Grandpa had picked up the roast, and proceeded to wash it off under the tap and place it back in the oven to finish heating. My grandparents served the roast that evening to my Aunt, Uncle, and Father, and until this very day…NONE of them had known this had happened. It was my grandparents well kept secret until now. 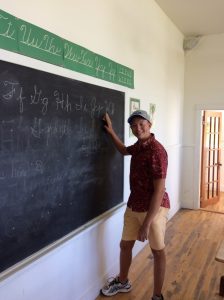 In the Schoolhouse, my aunt showed me how small dictionaries used to be and informed me on how the strap was used on misbehaving children. Ouch! We met a 5-year-old boy, who was very social for his age, and proceeded to teach him how to write his name in cursive on the chalk board. He loved it! I, unfortunately still cannot write…cursive or handwritten. HAHA, the young boy had better penmanship than me. 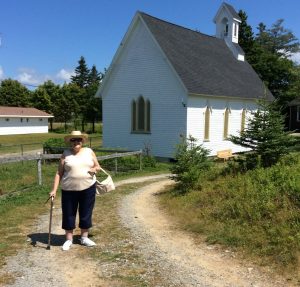 “Take me to church” I told my family. We walked through the main entrance and ran back into the 5-year-old boy performing a show on the organ for the tourists who entered the church. We gave him a standing ovation, which made his day. I decided to utilize my piano background and perform as well. Let me tell you, the foot pumps for the organ certainly give your legs a workout. 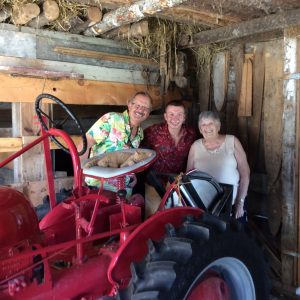 Entering the Family Barn, we met a kitten sleeping on a tractor, and I thought it was the perfect opportunity for a photo shoot. I have been told my family and I are very photogenic, I think this picture proves correct. (PS the kitten slept through the entire calendar shoot) 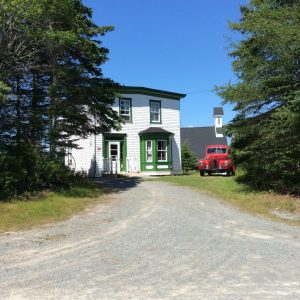 My Nanny told us what literally every gadget in the house was used for. There was an old razor, which to me looked like a can of tuna. But she taught me how it was supposed to be used. I was mesmerized, as well as highly confused, as to how I am supposed to shave with this “Tuna Can” of a razor. 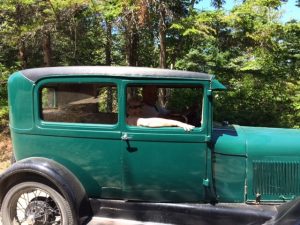 I thought we had lost my Nanny. When we looked back to where she sat down…she was gone. Suddenly we heard her gleefully yelling “Hello Family!” She said, “I knew a man would pick me up here!” There was a worker giving rides in one of the old vehicles, and he picked up my Nanny for a ride. She was giddy and having a grand time!

My Aunt, Mom, Dad, and I decided to take a ride once Nanny finished. We found out later the driver was one of the guitarists that performed at Trunk 7! Talk about small world. 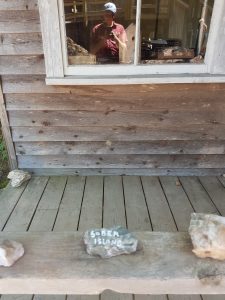 My father is a hydro-geologist, therefore inevitably when we got to the gold mine, he let ALL the jokes start flying. He showed me how to find fools gold, and taught me about gold blasting/salting. He also told me geology jokes from when he was younger like “Geologists can make the bedrock, and that they should not be taken for Granite!” 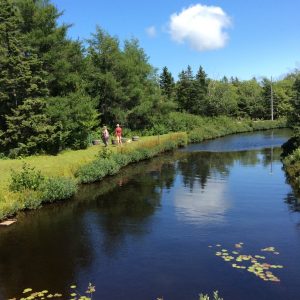 During this beautiful picture, my Aunt conversed with the goats. Whenever she would “Bahh”, so would the goats. I tried petting a goat while walking along the trail, but the goat was too startled by this encounter that he ran away “Bahh-ing” at the top of his lungs. We also talked to the roosters, who seemed less than impressed by our lack of rooster-to-human communication skills. Turning their backs and trotting away every time I clucked. I guess I forgot to take that language course in university. 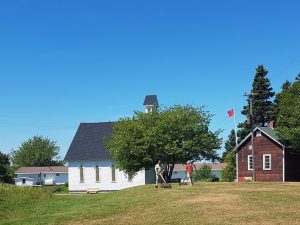 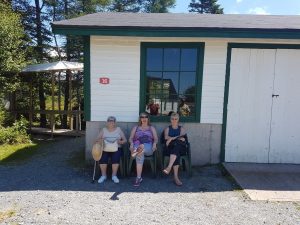 Peaking into the clam factory, we saw a beautiful set-up, which we later found out was for a wedding. My aunt, father, and I snuck in the building for a closer look. There were lights and tables decorated to the nines. Whoever was getting married would certainly have a special time to remember.

As was our time at Heritage Village, it truly lived up to its name as Memory Lane. My family told me stories of their youth that brought us closer together. The trip down Memory Lane brought out the child in each of us that day. This is the definitive proof… 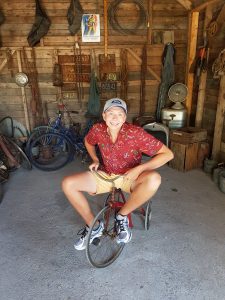 Piling in the car, with full bellies, we departed for home. We passed a house with a large rock Inuksuk on its property by the water. We passed by too fast to get a picture. Although contemplating turning back to get a picture with the inuksuk, we all felt the quick glimpse and the memories were fair enough. The entire day was made of new and old memories intertwining, and the wonderful photos and conversations will be forever cherished.