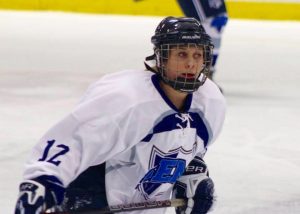 Hard-working, dedicated, determined, and well-rounded. Few of the words that best describe my friend Rachel Monk. Going through a year at Dalhousie University with her, I have seen her academic and athletic progress pay off.

Rachel, twenty years old, has been playing hockey since she was just ten. In grade twelve Rachel had been emailing Dalhousie University’s hockey coach and, after tryouts, was picked and put on the roster for the year. Having to decide between hockey and academics, Rachel only stopped playing full time Hockey at age nineteen to focus fully on her academic career.

Rachel initially played ringette when she was younger. She loved being on the ice with her friends and being part of a team. Her parents decided to put Rachel in a more competitive and aggressive sport…Hockey. Rachel’s parents saw her competitive edge early on, and wanted to help that skill blossom. Realising hockey’s similarity to ringette, except more aggressive, Rachel jumped on board with the idea of the sport. She loved it. Hockey quickly became a passion and a defining factor of who she is.

When just a Peewee, Rachel was scouted for preparatory school in Pennsylvania. With her tuition to SEM Prep fully funded, nothing was holding her back. Rachel attended SEM prep for two years. Within the two years, Rachel was awarded the “Most Offensive Player”, appointed captain of the SEM Hockey team, and was a named athlete on the Deans List. Rachel also played on Team Nova Scotia for four years, making them Atlantic Champion Gold Medalists four years in a row. As well, Rachel went through many rigorous tryouts and was picked from approximately twenty girls to represent the Atlantic Province.

Rachel was accepted into Dalhousie’s Kinesiology program while in grade twelve at Eastern Shore District High. I had the pleasure of working along side Rachel for a year, before switching to Commerce, as we were both in Kinesiology. I realized Rachel has a time management technique, and study talent like nobody else I know. The skills Rachel learned from Hockey and SEM Preparatory school gave her the edge needed to be a very successful student. Rachel has achieved a high standing GPA in her first two years of University and thanks her past academic, and athletic experiences for this honour.

Rachel has taken a step back from hockey, however athletics are still a high priority in her life. Rachel goes to the gym, no matter how busy, every day for at least two or three hours. With the goal to maintain the athletic progress and ability she gained over the years. Rachel states that “Getting regular exercise, a few hours a day, is good for helping with study and memorization”. When Rachel gets stressed with University work, instead of calling it quits and going to bed, she goes to the gym and works out. At the end of a workout, Rachel says she feels clarity and a new sense of focus that puts her back on track to finishing her daily studies.

Rachel aspires to go to med school. “Basically, I want to get into med school, and make a professional image for myself through as much volunteering, community involvement, and doctor shadowing as possible”. Rachel volunteered this past summer on a ten-day commission trip in Honduras, gaining valuable experience and helpful medical knowledge that most students did not take advantage of.

Rachel is currently studying upwards of 90 pages per night for the MCAT Test, with the end goal of entering Med School. Aside from the MCAT prep, and her University courses, Rachel’s been taking summer courses to give her that competitive advantage she deserves.

Rachel gives credit to her hockey career for solidifying her organizational techniques, time management, focus, and confidence. “Having a dual schedule between sport and school forced me to prioritize my time. I had to learn to wake up early in the morning, and make the most out of each day. I also learned to schedule time for my workouts, family, friends, my job, and my studies.” Regarding time management Rachel said, “Having to make the decision between going out with friends or getting that extra hour of study time, can be a hard choice for many people my age. But those are the sacrifices I had to make constantly as a varsity athlete. Don’t get me wrong, the decisions can be tough at times, but they need to be made.”

What was your biggest challenge since getting to Dalhousie, and how have you been working to overcome it? “Stress. The heavy course load, brought on heavy stress. I had stress management skills already in my life. However, the desire to show my skills to the best of my ability to my professors, brought on a whole new level of stress I had never experienced before. Having my parents to help talk me through my stress, and going to the gym have been great tension relievers. Also having a set sleep schedule and going to bed early helped me focus better.”

Rachel’s Comments on the Eastern Shore: “I’ve grown up in the Eastern Shore my entire life, making friends whom I consider to be brothers and sisters. Which is why when I moved away to go to prep school, I HAD to come back for my final year so I could graduate with my friends, and have my entire family able to see me walk across the stage. The Eastern Shore is such a family atmosphere, and that was the only place I could picture my final year. Although I was in Pennsylvania for two years, my heart lied in The Shore. My friendships back home didn’t sever, and with everyone begging for me to come back and graduate with them, it warmed my heart. It is such a great feeling when you are living in a small friendly community that is the Eastern Shore, when you cannot picture your final high school year anywhere else in the world but home. Coming back to Eastern Shore District High, I didn’t know too many people, but the teachers and students were so welcoming.”

Rachel’s favorite thing about the Eastern Shore: “I easily have to recommend the Musquodoboit Harbour Trail. I run that trail three out of seven days a week. I know it inside and out. I love the trail because it’s relaxing, and you really get to see the beauty of the community you are in. The trail sights I see down the shore are much more amazing then the sights I see running in town.”

At the end of the day, no matter if Rachel was going to Dalhousie University or playing hockey in Halifax, going to SEM Preparatory school in Pennsylvania, or volunteering in Honduras, her heart lies with the Eastern Shore. As the saying goes, home is where the heart is.